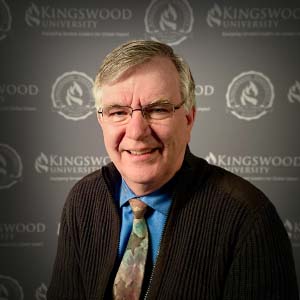 Clinton Branscombe makes the Old Testament come alive as he shares little-known information and a fresh perspective on the life and culture of the ancient biblical world. Of the thirty-nine books in the Old Testament, he finds Genesis, the book of beginnings, a favourite to teach. “I have a particular interest in the patriarch Jacob,” says Professor Branscombe. “And, I have focused hours of research on his story.”

My desire is that Kingswood students would not only know but also understand the Old Testament, in order to properly develop their biblical worldview.

Professor Branscombe initially came to Kingswood as a student. After pursuing further studies, he later returned to the University in 1988 to begin teaching. He and his wife Jo-ette were the first BBC graduates to get married in the former chapel that was located in Nicholson Hall.

Professor Branscombe enjoys woodworking, is a keen DIY-er, and has renovated several parts of their late 19th century home. The avid walker and continual learner can be seen listening to podcasts as he walks to and from the University every day.

ATTENTION: The Kingswood website uses cookies to determine how our users use our website. This information is used to improve your experience on our site and is used only in the aggregate and does not include any personal information. By proceeding, you agree to allow this use of cookies.OkRead more