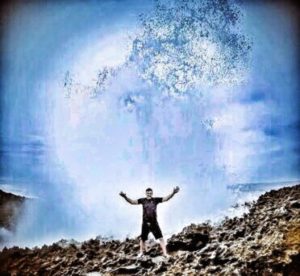 Colleen and I had rented a small box of a car and were tooling around Puerto Rico for a week. We were having a great time and everything thus far had gone according to our lack of a plan. It was our last full day on the island, and we were on the rugged north shore, known for its jagged rock formations and big waves. We were on our way to see a “blowhole” someone had told us about near the town of Isabela.

After seeing the blowhole, we wandered on the rocks and soaked in the sun. It was a beautiful day. We came upon a group of locals taking pictures at a spot where the waves broke against the rocks and shot straight up behind you. It looked dangerous, but the locals assured us that they had done this many times before and it wasn’t as dangerous as it appeared. One even offered to show us exactly the right spot to stand and to take the photos for us.

I went first to make sure it was okay, and sure enough, if you stood in a certain spot the waves would break behind you and shoot straight up, creating a wall of water. You got a little wet, but it was definitely an Instagram worthy moment. After a few shots, Colleen came out on the jagged rocks to join me. That is when it happened. A rogue wave. No one knows for certain what causes a rogue wave, but some believe it is a combination of forces coming together at once to create a higher and more powerful wave. That is probably what happened that day.

Instead of breaking against the rocks and shooting up, this giant wave came over the rocks and broke on top of us with great force. Unfortunately, we were slammed down onto the jagged rocks. Fortunately, our Puerto Rican friend kept shooting, capturing a series of moments where we were posing unknowingly, then being knocked down by the wave, and finally retreating to safety with shock and confusion on our faces. We didn’t get swept out to sea, but we did get soaked, battered, bruised, and cut up on the sharp rock. We basically limped back to our car, sorer and wiser, with the knowledge that it could have been much worse.

The current crisis we are in reminds me of that day. Life was normal, and then it wasn’t. One moment it was sunny and fun, the next we were overcome from behind by an unexpected and powerful force. At the moment, it feels like we have all been hit by a rogue wave. A combination of forces beyond our control have created something overwhelming and much bigger than anticipated. What we are facing is on the scale of a 9-11, or a tsunami, or a world war. It will be forever in our memories.

Most of us will survive, but we may feel confused and a little beat up by the whole experience. We may have to limp our way back to a sense of normalcy. Hopefully, we will come out of this, not just sorer, but wiser. Aware of how fantastic and fragile everyday life is. Grateful to God for our families and all the things we took for granted. Thankful that although we may carry a few scars, we have not been swept out to sea. 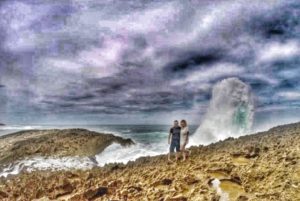 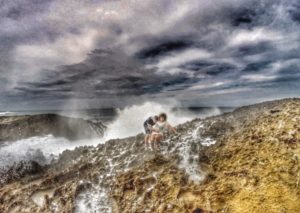 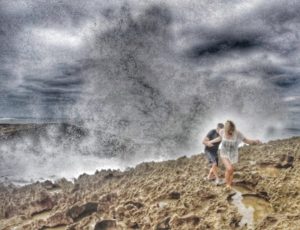