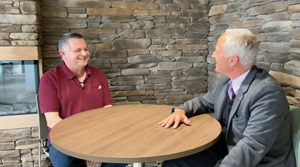 “If you get me out of this, I’ll do whatever you want me to do.”  That was the prayer Greg Mann prayed 28 years ago.  He had found himself in a spot of trouble and did what many of us tend to do, he negotiated with God.  Little did Greg know that God would take him up on his prayer.  Two weeks after those words left his lips, Greg was working as the chef at Bethany Bible College, now Kingswood University.  He has remained a beloved fixture in that role for nearly three decades.

On October 16, 2020, the newly renovated dining hall was named in Greg’s honour.  As President Lennox noted at the dedication, this naming was “in recognition of Greg’s long service to the university and its students, his dedication to the task, and his commitment to build into the lives of our students.”

Those students, now alumni, still deeply appreciate Greg and his influence on them.  When it was announced In a ministerial gathering made up largely of Kingswood alumni that the new dining hall would be named after Greg, the place erupted in enthusiastic applause.  One alumnus confessed later that he had never been more proud of his alma mater than for this decision to honour Greg.

The renovations to the dining hall were extensive, including new flooring, wall covering, ceiling, ventilation, lighting, servery stations, furniture, and more.  As well, one end of the dining room was designed with a “Starbucks-feel,” complete with a propane fireplace for a relaxing ambiance.

The renovations were completed debt-free, thanks to generous donors, and are being thoroughly enjoyed by Kingswood students.  A dedication service was held on Friday, October 16th to formally open this facility.  A livestream of the ceremony and a video tour of the Greg Mann Dining Commons are available at https://youtu.be/e9ruxkxhhK8.