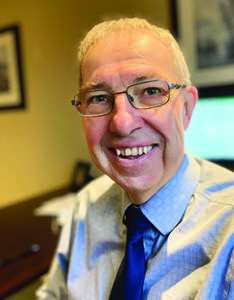 Little did anyone realize the wide-ranging impact of President Mitchell’s decision more than 40 years ago.  It was January of 1979 when Ivan Graham and his wife, Debbie, moved with their family from Nova Scotia to begin his ministerial preparation at what was then Bethany Bible College.  Ivan had been working in the banking industry when he heard God’s call.

Dr. Mitchell recognized Ivan’s abilities and hired him to work part-time as a bookkeeper.  As his abilities quickly became evident to the President and others, Ivan was eventually invited to join the staff full-time as Business Manager.  At first he resisted, not sure how this would fit with his calling to ministry.  President Mitchell assured Ivan that working as the Business Manager at Bethany would definitely be a ministry.

More than 40 years later, these words have been proven true over and over again.  Dr. Dave Medders, who served as Bethany’s president for 19 years, called Ivan “trustworthy, dependable, solid as a rock.”  Dr. Mark Gorveatte, Kingswood’s president from 2011-2015, describes his service with Ivan as an absolute joy.  “He always found a way to make things happen on time, under budget, with excellence, and with a positive attitude.”

Current President, Steve Lennox, highly values Ivan’s combination of faith and financial expertise.  “Ivan found a way to do much with little all the while believing in a God who owned everything.  He was passionate about bridging the gap between the cost of a high-quality education and what a student was able to pay.”

Everyone who knows Ivan also celebrates his sense of humor.  They speak of his ready laugh and the ever-present twinkle in his eye.

For his part, Ivan looks back at the past four decades as a “great experience.”  He especially appreciates his Kingswood co-workers, trustees, and donors, and the opportunity to raise his family in the university community.  Looking back over his career, Ivan confesses, “there’s very little I’m not thankful for.”

Ivan’s ministry was celebrated by staff last spring and at the Board of Trustees dinner in Wesley Hall on Friday, October 16th.